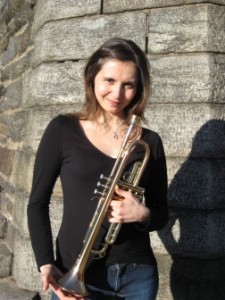 Originally from Limoges, France, Julie Desbordes’ love for music began from the moment she picked up the cornet at age 8.She is now a sought after conductor, trumpeter and teacher residing in Manhattan, New York City.Julie was recently appointed Associate Conductor for The Chelsea Symphony, as well as their Associate Conductor of Education and Outreach.She performs with several New York-based groups, from chamber music (The Brass Standard) to various symphonic orchestras.Ms. Desbordes is also the Site Director, Trumpet Instructor and Orchestra Conductor for the Harmony Program (Harlem), inspired by El Sistema.In addition, she is a Score Consultant for the Metropolitan Opera’s Live in HD Productions.

As a trumpeter, Julie started performing internationally at a young age (France, Germany, Spain, U.S. and Canada).Her love of a wide variety of musical styles has led to musical adventures ranging from pop groups to big bands, from Broadway (Evita, 2012, NYC) to traditional ensembles and various orchestras such as Harmonie Municipale de Limoges (of which she later became the Assistant Conductor and Assistant Director from 2004-2007).As a teacher, Julie searches to expand her pedagogy with activities that develop musical skills, team spirit, and physical and emotional awareness.She maintains a private teaching studio as well as working for the Harmony Program.